The Government of Israel’s System of Oppression Against Palestinians

Amnesty International’s new research report, Israel’s Apartheid Against Palestinians: Cruel System of Domination and Crime Against Humanity shows that Israeli authorities impose a system of domination and oppression against the Palestinian people in Israel and the Occupied Palestinian Territories (OPT), and against Palestinian refugees. Laws, policies, and institutional practices all work to expel, fragment, and dispossess Palestinians of their land and property, and deprive Palestinians of their human rights. We conclude this treatment amounts to an institutionalized regime of oppression and domination defined as apartheid under international law.

Amnesty’s research, campaigns, advocacy, and statements pertaining to Israel are focused on the actions of the Israeli government — they are not, and never will be, a condemnation of Judaism or the Jewish people. Antisemitism is antithetical to everything Amnesty represents as a human rights organization.

Apartheid is a violation of public international law, a grave human rights violation, and a crime against humanity. It constitutes both a system (formed of laws, policies, and practices) and a crime (specific acts).

The term “apartheid” was originally used to refer to a political system in South Africa which explicitly enforced racial segregation, and the domination and oppression of one racial group by another. It has since been adopted by the international community to condemn and criminalize such systems and practices wherever they occur in the world.

The Apartheid Convention and the Rome Statute define apartheid as a crime against humanity, committed when any ‘inhuman’ or ‘inhumane’ act is perpetrated in the context of an ‘institutionalized regime’ of systematic ‘oppression’ and ‘domination’ by one racial group over another, with the intent to maintain that system. Inhuman/inhumane acts include unlawful killing and serious injury, torture, forcible transfer, persecution, and the denial of basic rights and freedoms. 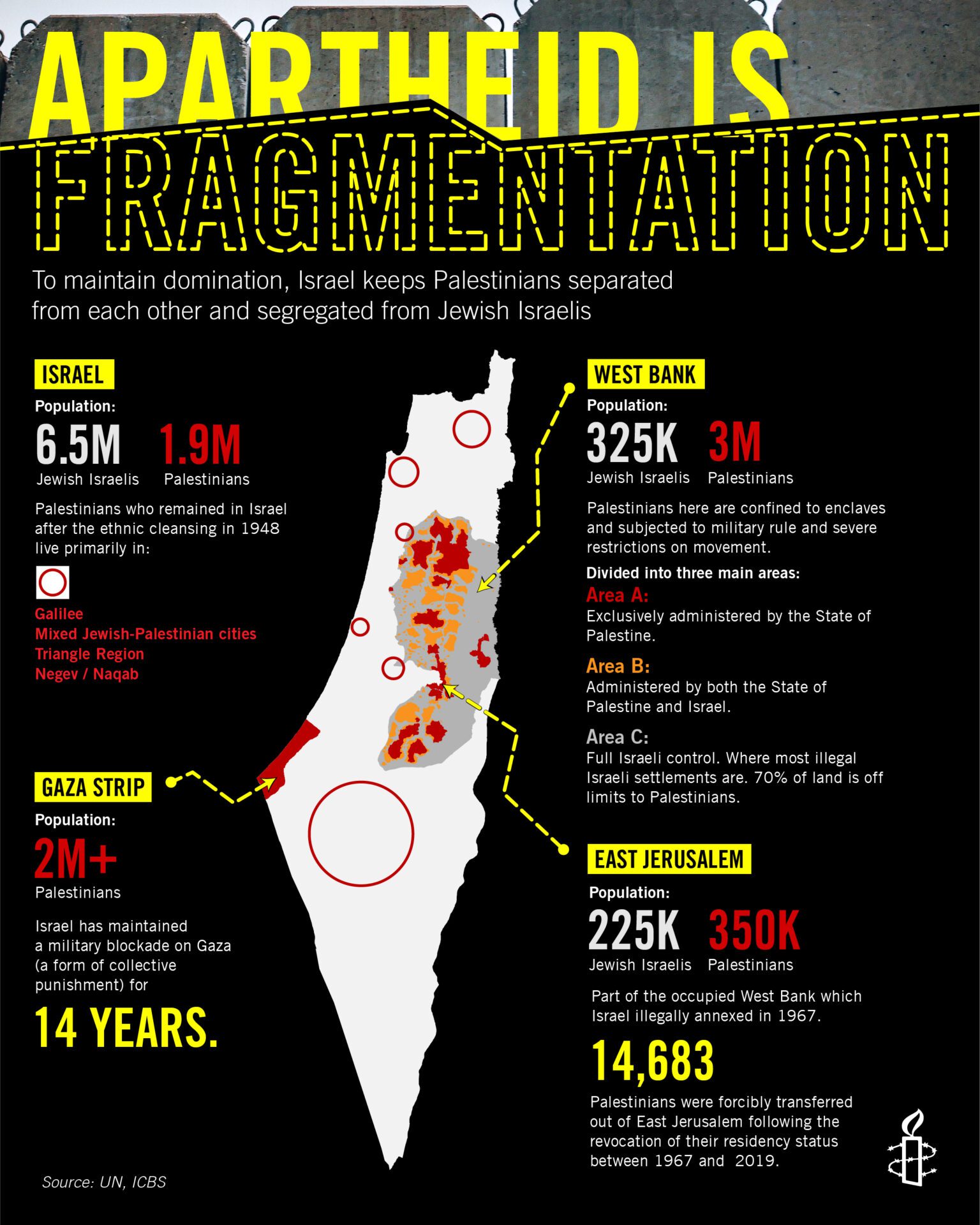 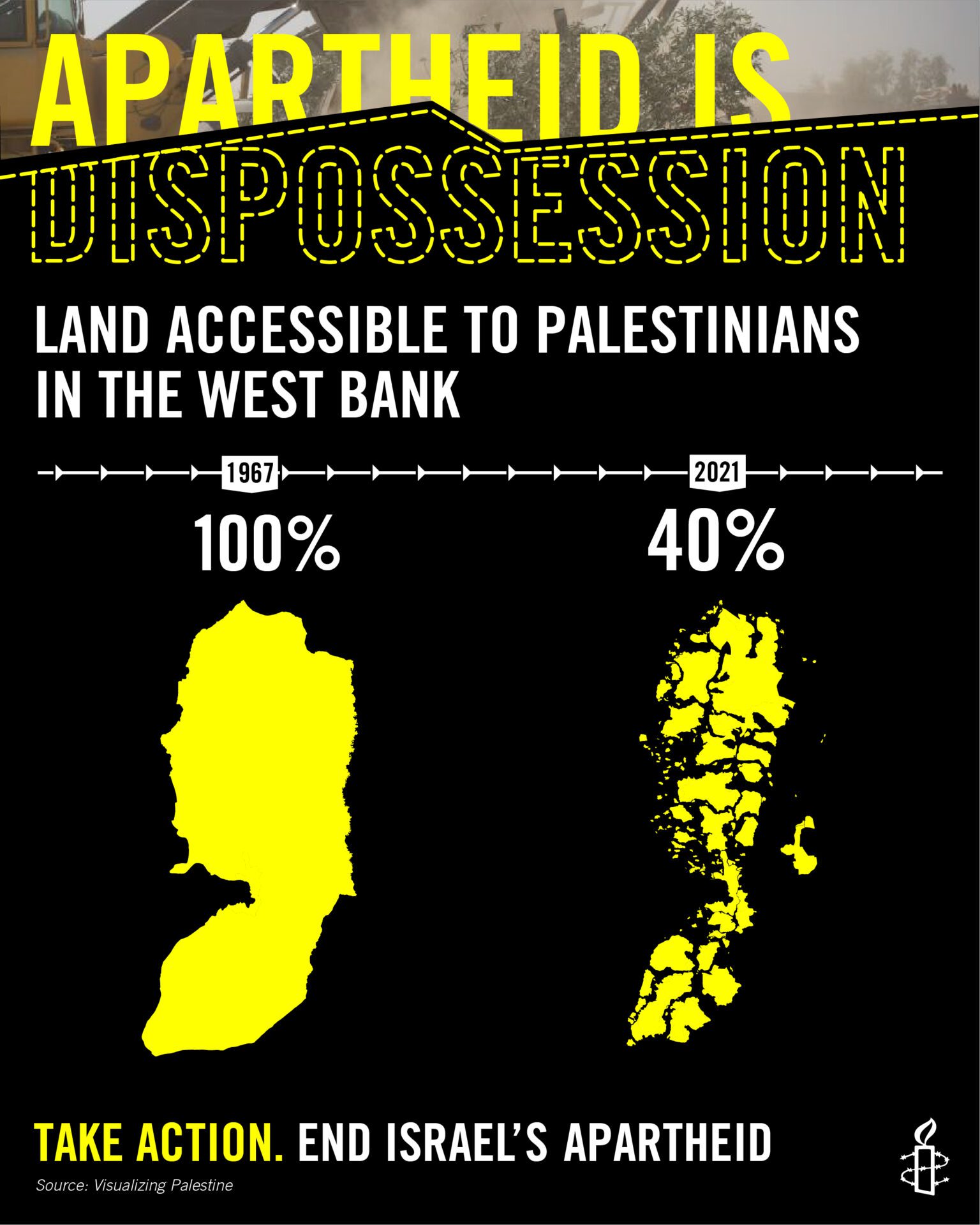 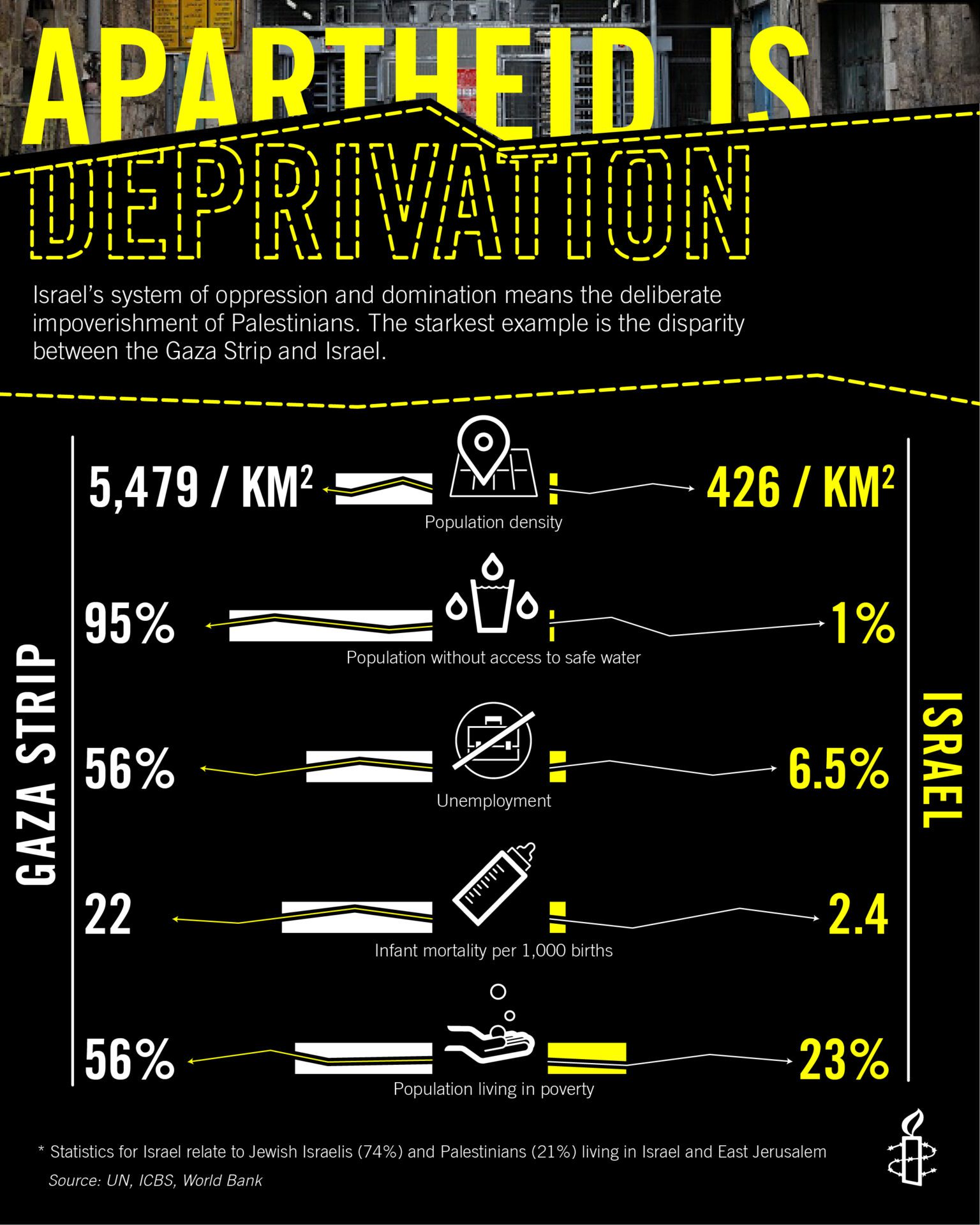 WHY IS AMNESTY INTERNATIONAL CAMPAIGNING AGAINST APARTHEID?

Apartheid is a crime against humanity and is not acceptable anywhere in the world. When a crime against humanity is committed, we all have an obligation to help end it and hold those responsible to account. This report serves to amplify the growing calls from Palestinian and Israeli civil society for justice and to encourage world leaders to strive for peace based on justice including human rights and accountability. Our research and campaign aim to end the government of Israel’s apartheid against Palestinians. 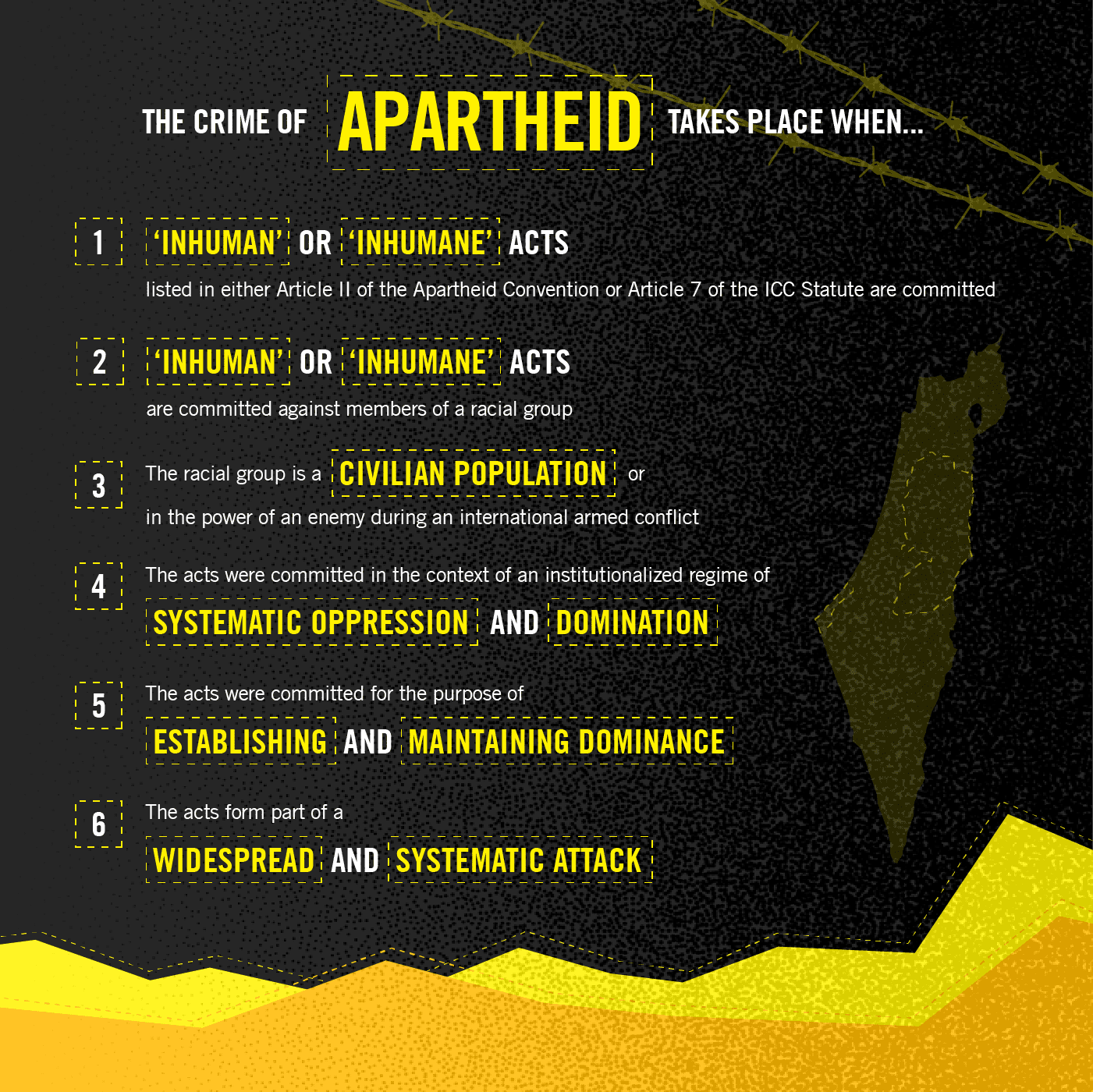 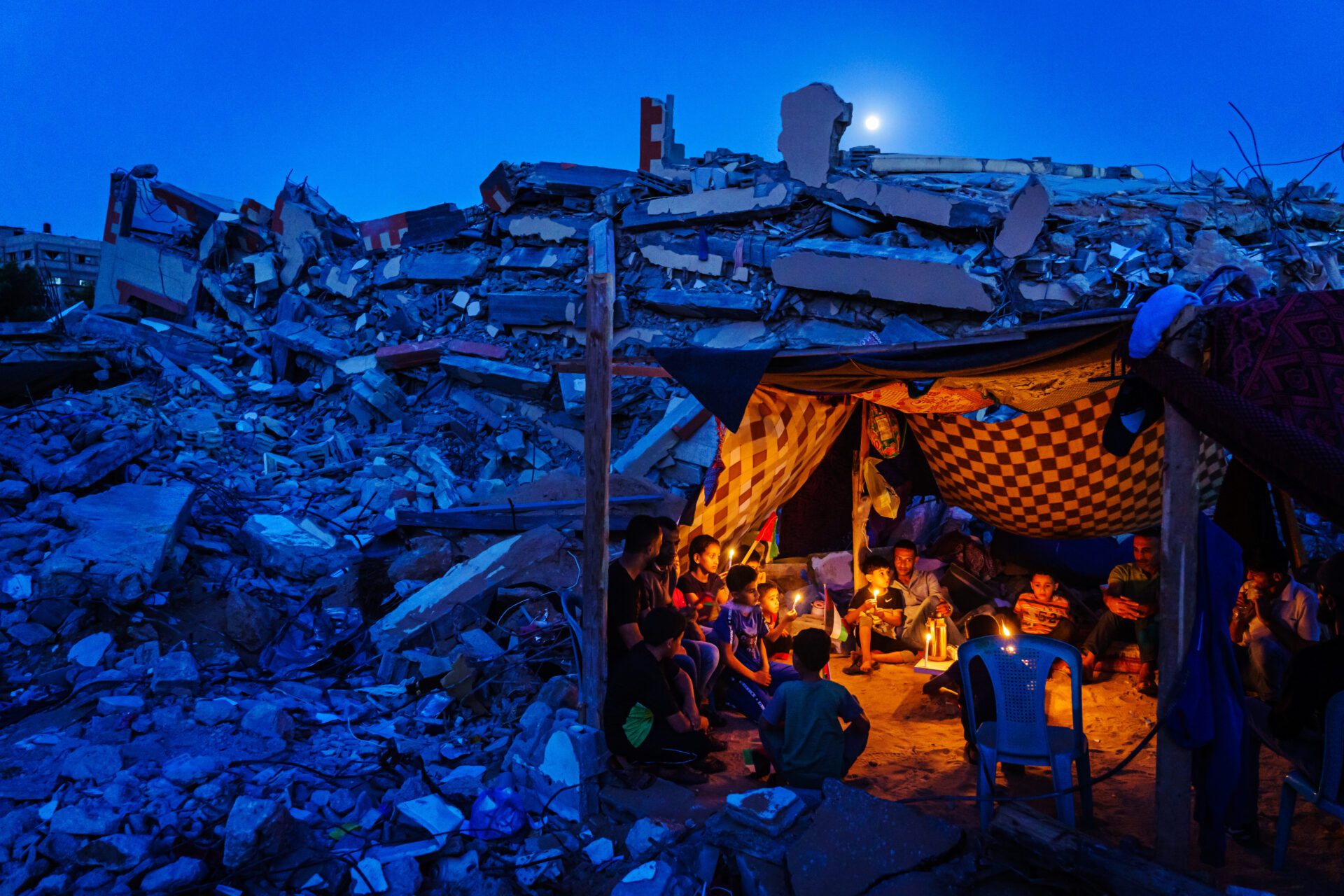 GAZA CITY, PALESTINIAN TERRITORY — MAY 25, 2021: Dozens of Palestinian children and family members attend a candlelight vigil to condemn the killing of children and civilians, which is held over the rubble of homes destroyed by Israeli military strike during the 11-day escalation between Israel and Gaza military factions. (Photo by MARCUS YAM / LOS ANGELES TIMES)

THE ISRAELI GOVERNMENT'S SYSTEM OF APARTHEID MUST END

Amnesty’s research confirms that the government of Israel has created and maintains laws, policies, and practices that deliberately oppress Palestinians. This includes racist seizures of property, and policies that make it impossible for many Palestinians to build homes. Additional violations include unlawful killing and serious injury, torture, forcible transfer, persecution, and the denial of many other basic rights and freedoms. We MUST speak out to end it.

We’ve drafted a letter for you to send. As a first step, we’re urging Prime Minister Bennett to cancel all orders for forced evictions and home demolitions against Palestinians, and end forced displacement of Palestinians.

PALESTINIAN LIFE UNDER APARTHEID IN ISRAEL AND THE OPT 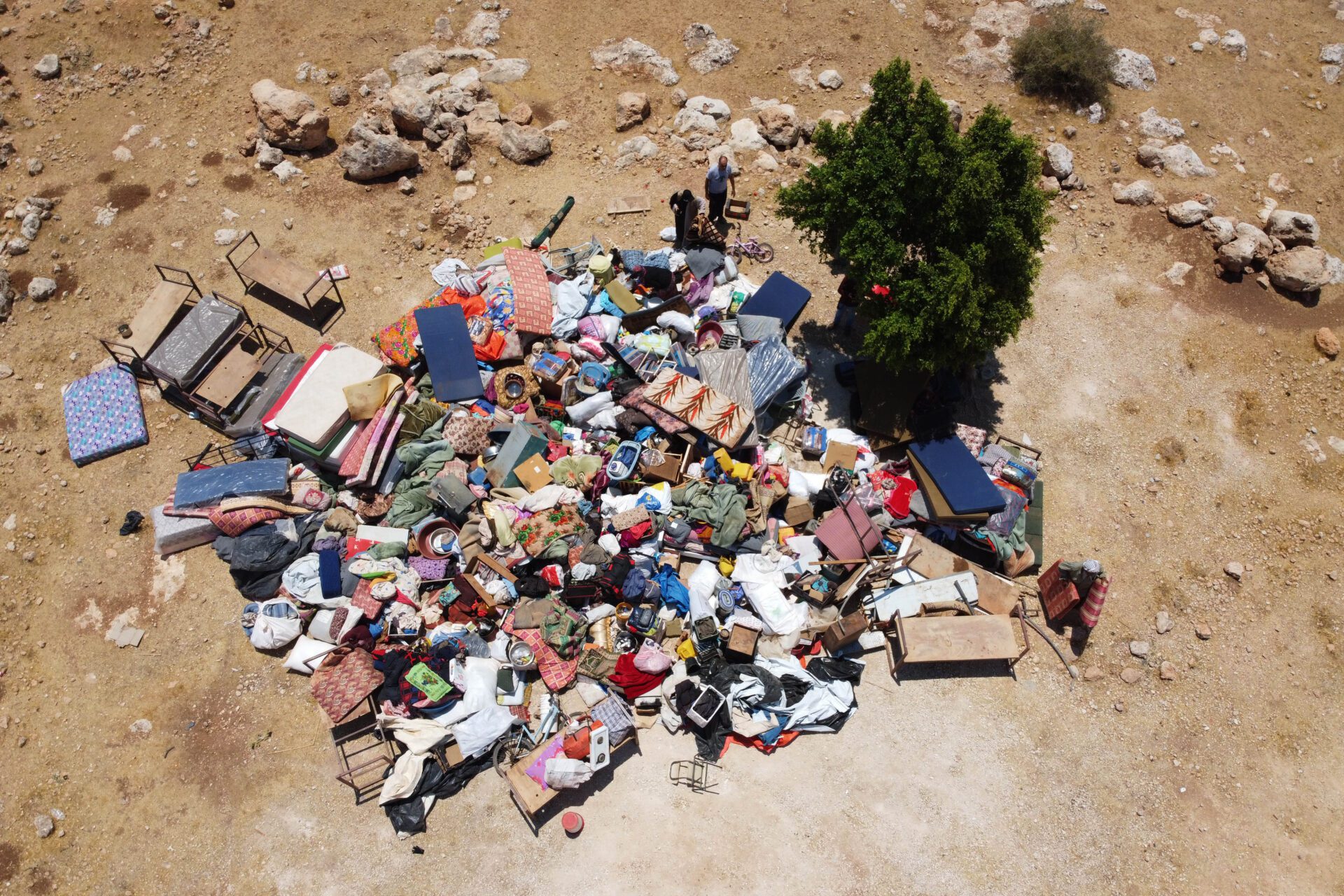 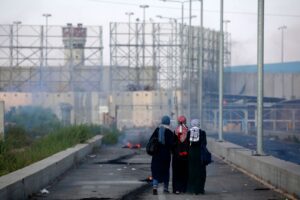 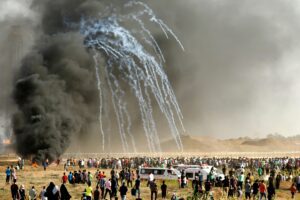 Palestinians are systematically subjected to home demolitions and forced evictions, and live in constant fear of losing their homes.

For more than 73 years, the government of Israel has forcibly displaced entire Palestinian communities. Hundreds of thousands of Palestinians’ homes have been demolished, causing terrible trauma and suffering. More than 6 million Palestinians remain refugees, the vast majority of whom live in refugee camps including outside of Israel/OPT. There are over 100,000 Palestinians in the OPT and another 68,000 inside of Israel at imminent risk of losing their homes, many for the second or third time.

Mohammed Al-Rajabi, a resident of Al-Bustan area in Silwan, whose home was demolished by Israeli authorities on 23 June 2020 on the basis that it was built “illegally”, described to Amnesty International the devastating impact on his family:

“This is extremely hard to deal with. It might be difficult to put into words… and I sensed that it was harder on my kids than on us. They were really excited for us to have this new home. I’m going to keep the photos from that day and show them to my children when they grow up, so they do not forget what happened to us. I will tell them, ‘you see what kind of memories I have to pass on to you?’ My plan was for them to have a warm family home close to their loved ones and family members. Now I’m passing on the memories of their first childhood home being destroyed.”

Belongings from a Palestinian family house are scattered on the ground, after the house was demolished earlier that day by Israeli forces in the village of Umm Al-Khair in the occupied West Bank, on 9 August 2016. (Photo by Active Stills)

The government of Israel has long used discriminatory laws and policies to separate Palestinians from their families. For example, Palestinians from the West Bank and Gaza cannot gain legal status in Israel or occupied East Jerusalem through marriage, denying their rights to family unification. This policy has forced thousands of Palestinians to live apart from their loved ones; others are forced to go abroad, or live in constant fear of being arrested, expelled, or deported.

These measures explicitly target Palestinians, and not Jewish Israelis, and are primarily guided by demographic considerations that aim to minimize Palestinian presence inside Israel/OPT.

Sumaia, was born and raised in Lod in central Israel. She married her husband, who is from the Gaza Strip, in 1998 and he moved to live with her in Lod. In 2000, Sumaia and her husband began the process of applying for family unification, so they could live together legally. The family unification process took 18 years, during which the couple lived in fear and anxiety. Sumaia told Amnesty:

“The government is controlling every detail of our lives, they are in our bedroom, in our homes. One of the most extreme cases was when they arrested my husband in 2004 while I was giving birth to one of my daughters…while I was in the delivery room they arrested him!” 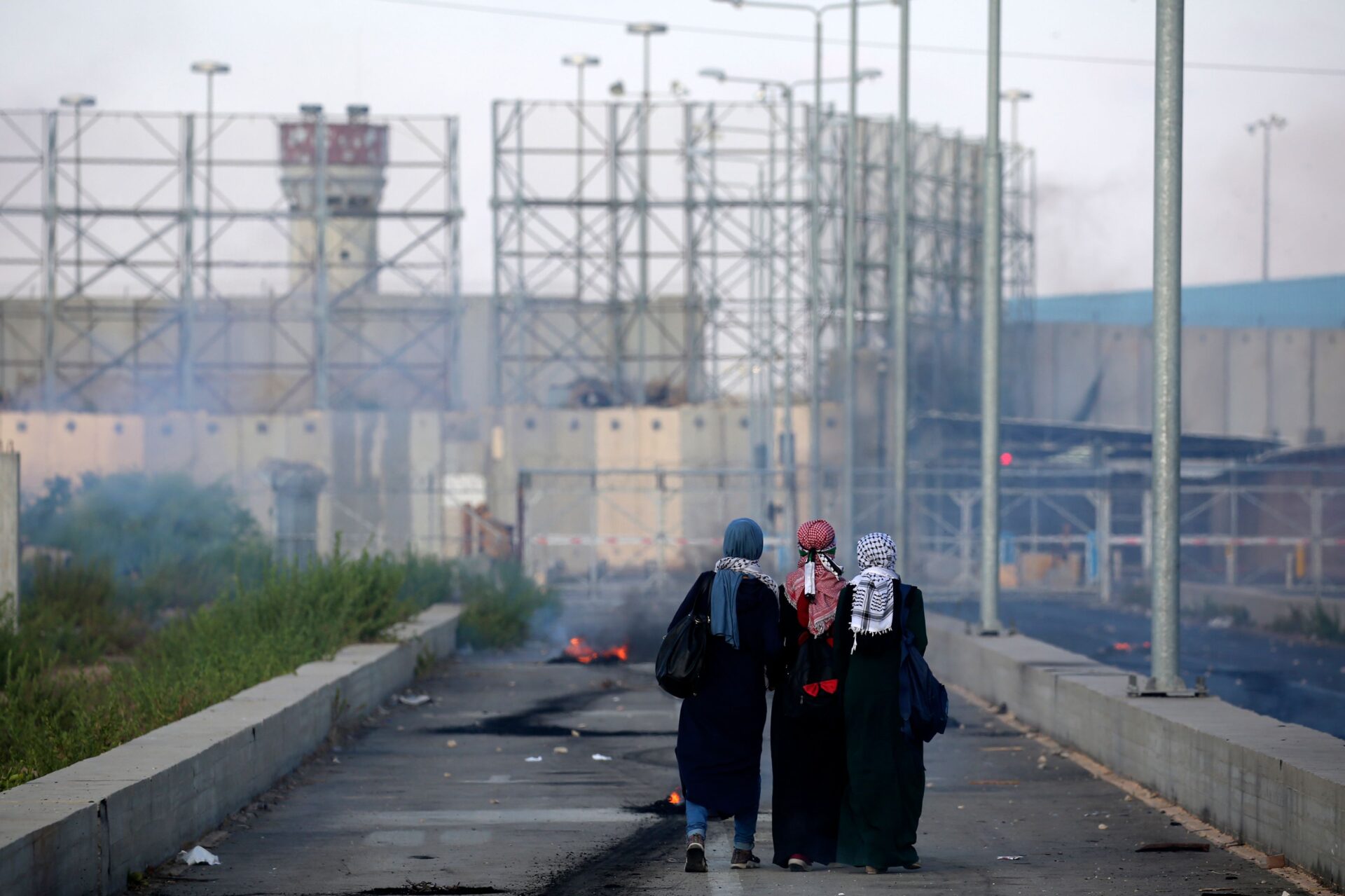 Palestinian protestors walk towards the border during a demonstration at the Erez crossing with Israel on September 18, 2018, in the northern Gaza Strip. (Photo by SAID KHATIB / AFP via Getty Images)

Over the past 14 years, more than 2 million Palestinians in the Gaza Strip have been living under the Israeli government’s unlawful blockade. Along with four major military offensives, the blockade has had catastrophic consequences for the people of Gaza.

The blockade is a form of collective punishment. It forces Gaza’s population – the majority of whom are refugees or their descendants who fled in 1948 – to live in increasingly dire conditions. There are severe shortages of housing, drinking water, electricity, essential medicines and medical care, food, educational equipment and building materials. In 2020, Gaza had the world’s highest unemployment rate, and more than half of its population was living below the poverty line.

On March 30, 2018, Palestinians in Gaza launched the Great March of Return, a series of weekly mass demonstrations along the fence between Gaza and Israel.

They were demanding their right to return to their villages and towns in what is now Israel, as well as an end to the Israeli government’s blockade on Gaza. The response was brutal: by the end of 2019, Israeli forces had killed 214 civilians, including 46 children, and injured more than 8,000 others with live ammunition. A total of 156 of those injured had to have limbs amputated.

More than 1,200 patients require long-term, complex and expensive therapy and rehabilitation, and tens of thousands more require psycho-social support -none of which are widely available in Gaza.

The blockade prevents Palestinians from accessing adequate healthcare, life-saving and other emergency medical treatment only available outside Gaza. The Israeli authorities often delay these permits and sometimes fail to provide them at all.

Adham Al-Hajjar, 36, is a freelance journalist and lives in Gaza City. On April 6, 2018, while he was covering the Great March of Return demonstrations, Israeli snipers positioned along the fence separating Gaza from Israel shot him. He is unable to get the medical help he needs in Gaza because of the debilitated health services there.

“The bullet that entered my leg did not just enter and leave my body. It entered and stopped everything; it stopped my life. Just because a soldier pulled the trigger without thinking of how it would devastate my life. Did he or she ever think about what this would cause? I am walking around as a dead man, everything in my life froze from the moment that bullet entered my leg.” 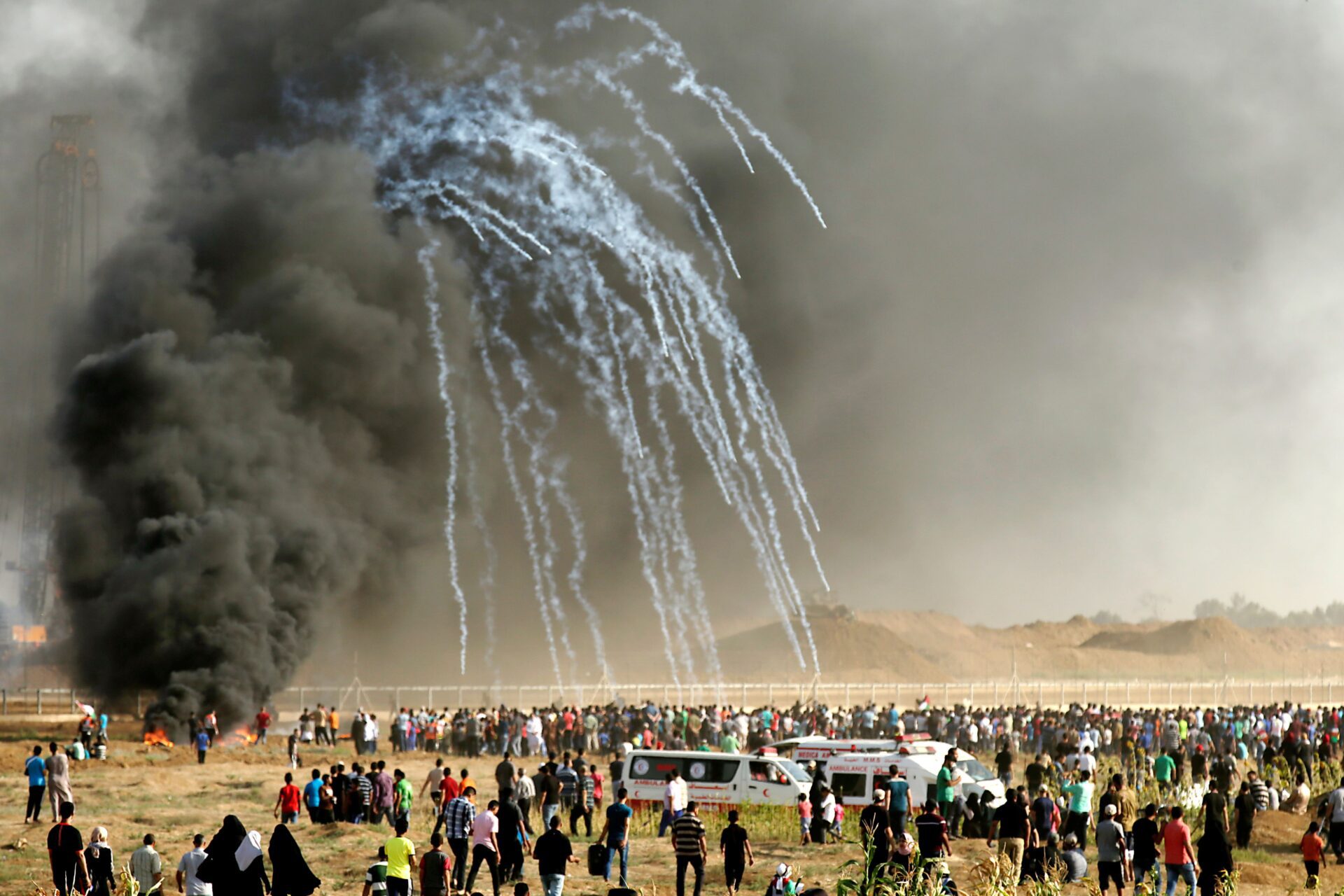 Palestinian protesters run for cover after Israeli forces launched tear gas canisters during a demonstration along the border between the Gaza strip and Israel, east of Gaza city on June 22, 2018. (Photo by MAHMUD HAMS / AFP)

Amnesty International is providing the following wide-ranging recommendations to the Israeli government and other relevant stakeholders to dismantle the system of apartheid against Palestinians and end the associated human rights violations. We are making recommendations to the Israeli authorities covering laws, practices, and policies that relate to Palestinians in general, as well as specific ones relating to each of the domains of control – Israel, East Jerusalem, the rest of the West Bank and the Gaza Strip – and Palestinian refugees outside Israel and the OPT. We also include a few recommendations for the Palestinian authorities.

RECOMMENDATIONS TO THE GOVERNMENT OF ISRAEL

AIUSA RECOMMENDATIONS TO THE U.S. GOVERNMENT

To meaningfully uphold human rights, as required by U.S. law and international law, we call on the Biden administration and Congress to take the key actions detailed below. 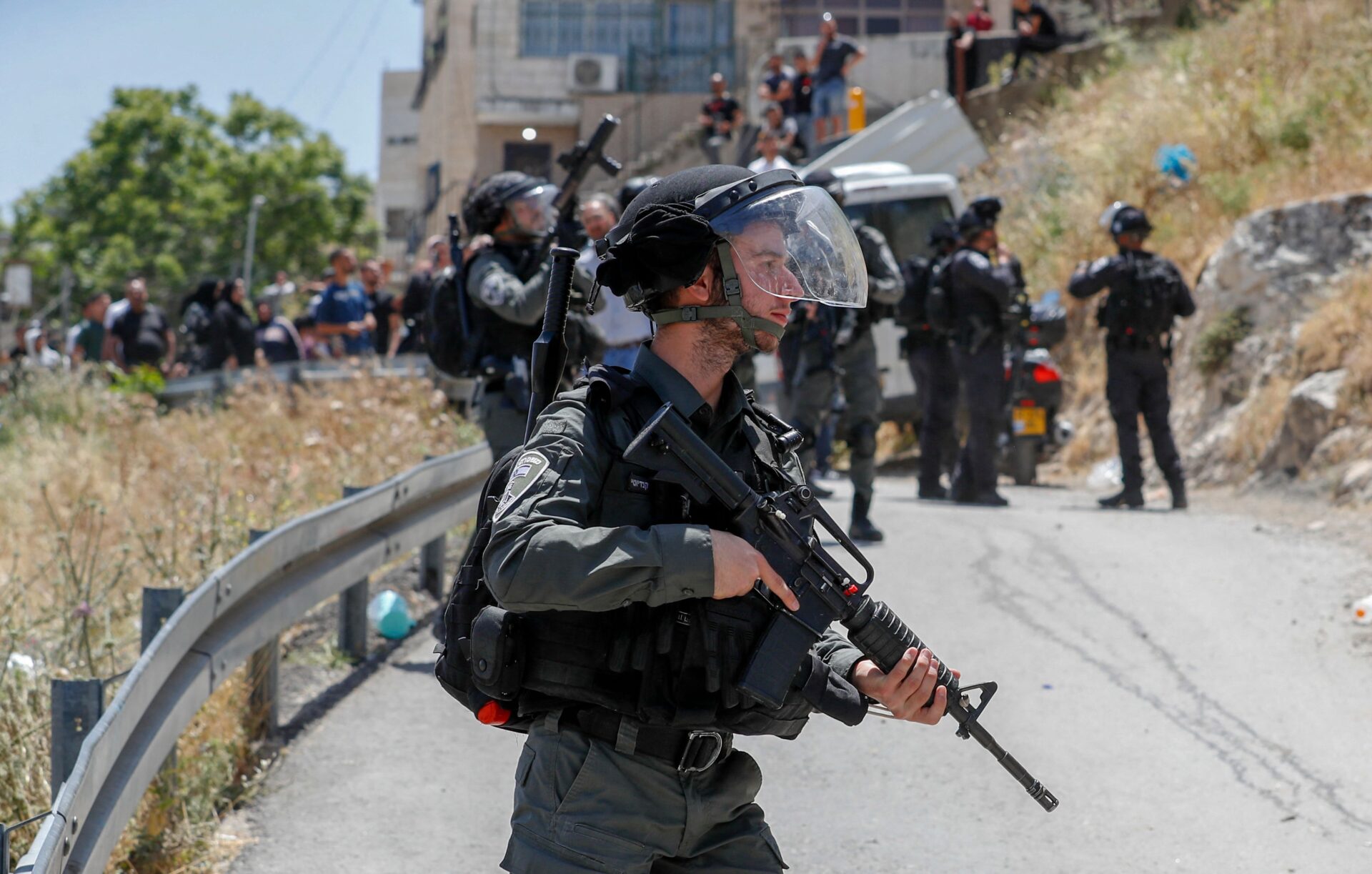 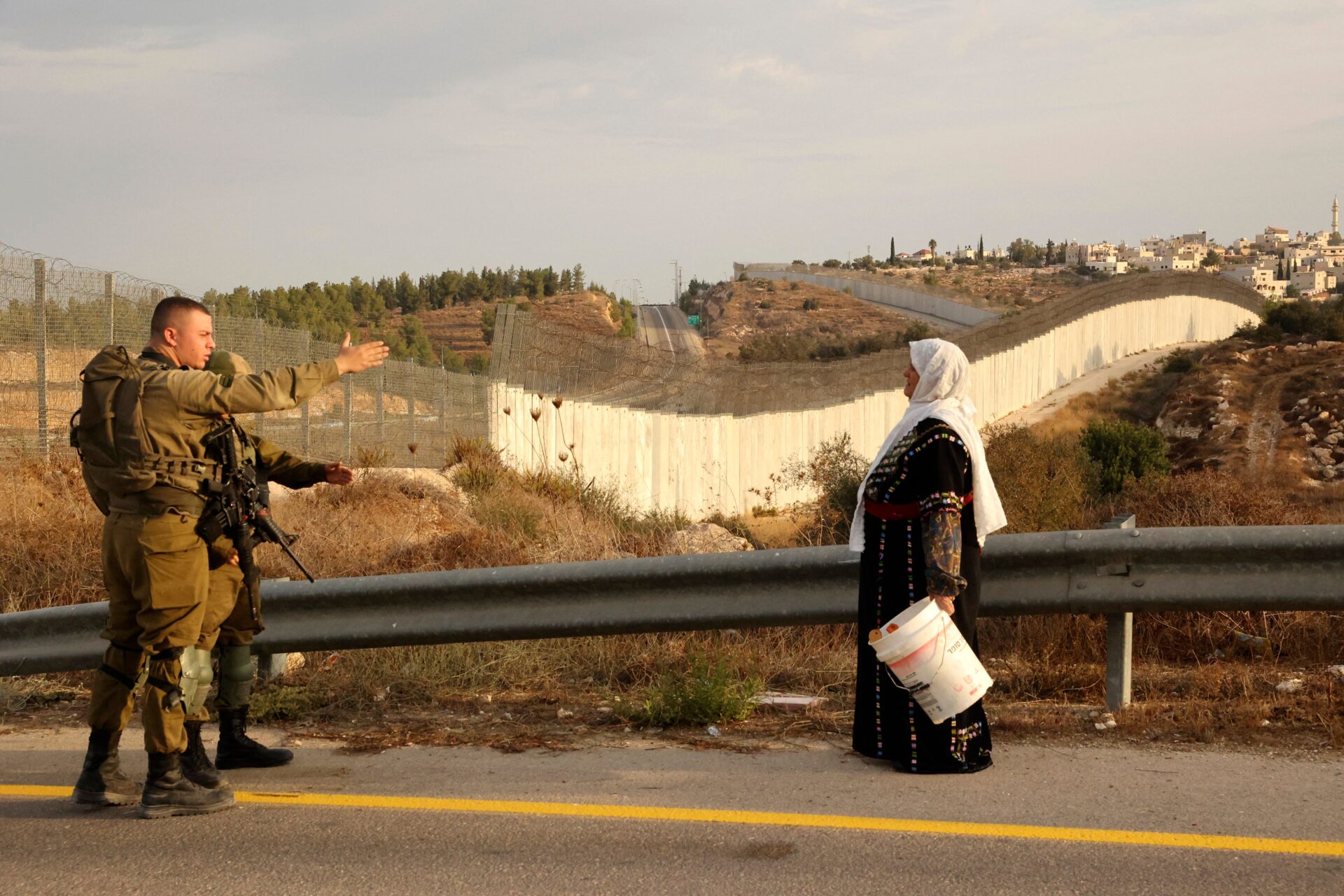 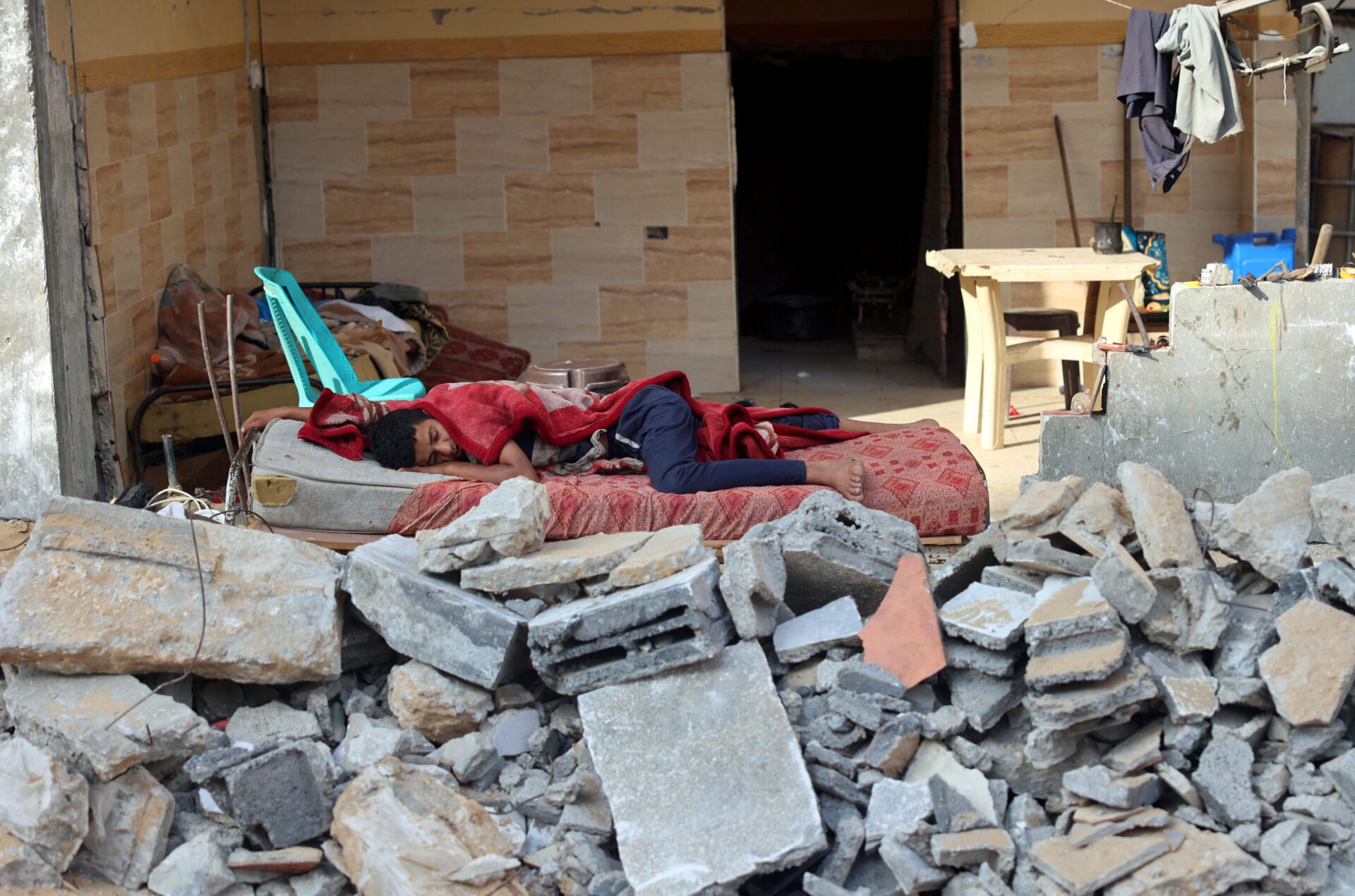 A Palestinian boy sleeps in the ruins of his family house that was destroyed in Israeli air strikes in Gaza City on July 2, 2021. (Photo by MOHAMMED ABED/AFP via Getty Images)

DISMANTLE THE SYSTEM OF APARTHEID IN ISRAEL

There is no place for apartheid in our world. It is a crime against humanity, and it must end.

For decades, Palestinians have been calling for an end to the oppression they live under. All too often, they pay a terrible price for standing up for their rights, and they have long been calling for others around the world to help dismantle the cruel system.

Israeli authorities have enjoyed impunity for too long. The international failure to hold the government of Israel to account means Palestinians are still suffering every single day.

As long as Palestinians are denied equal rights, peace and security will remain a distant prospect for Israelis and Palestinians alike. Let this be the beginning of an end to the Israeli government’s system of apartheid against Palestinians.

Join us in the fight for justice, freedom, and equality for all.