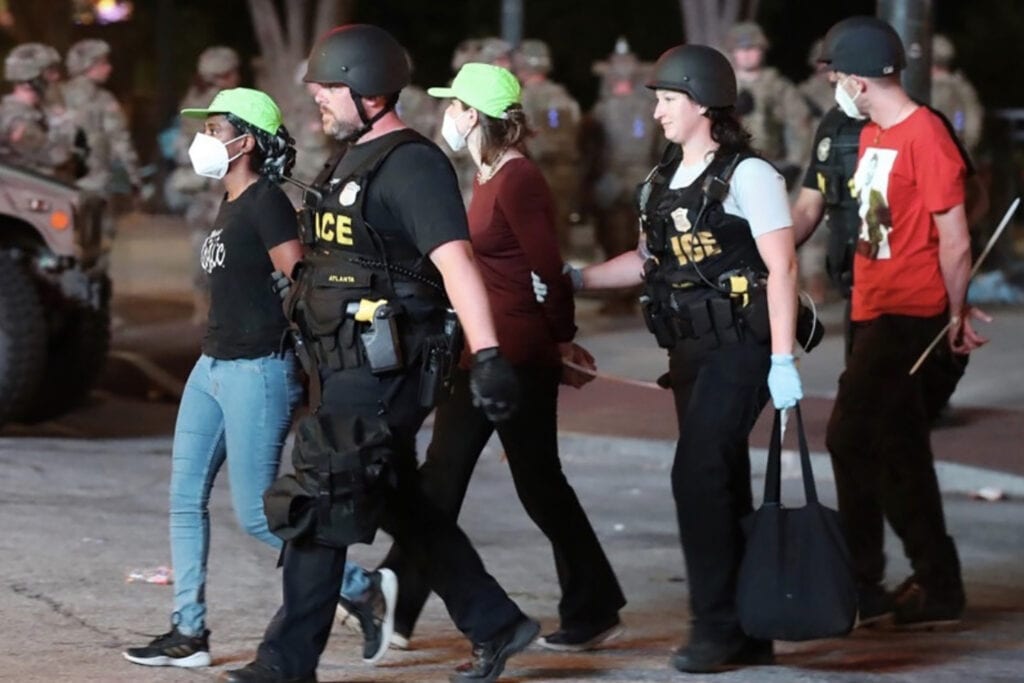 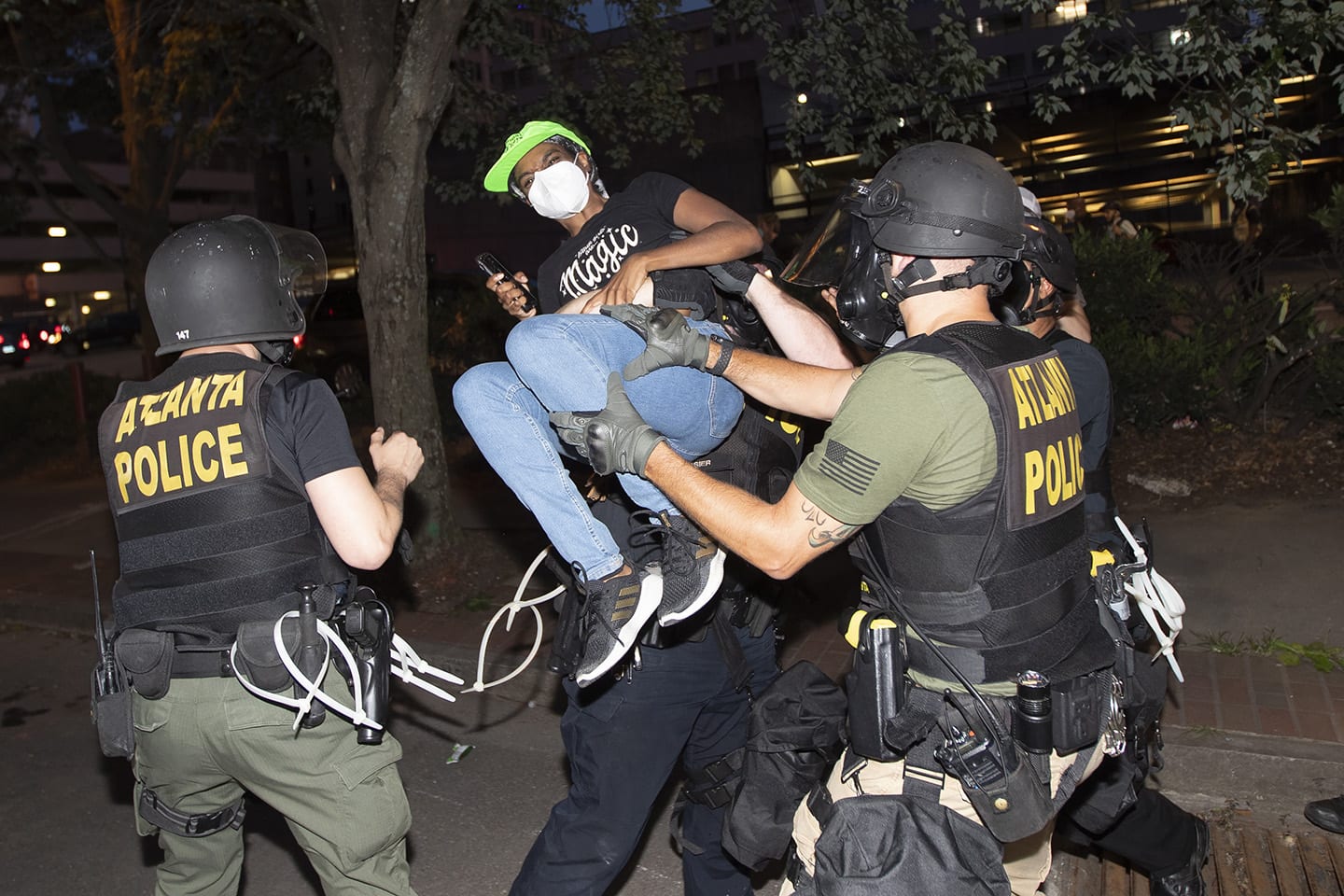 “I do think we were targeted as legal observers. I think there’s no way they didn’t know who we were. Police act differently when they know they are being watched. Similar to the arrest of journalists — at the end of day, we need people who can tell this story, collect this information, or the government can do whatever it wants.”

Megan Harrison and Asia Parks, NLG legal observers in Atlanta, Georgia, were arrested and detained for over 16 hours. Within a few minutes of curfew on the evening of 1 June 2020, police separately arrested the two women as they were leaving a protest; they had been serving as legal observers, wearing their green NLG hats and collecting names from protesters.

Megan Harrison said that as she walked away from a line of protesters, she heard someone shout: “Get the girl in the green hat.” A policeman grabbed her by the shirt from behind, cuffed her wrists tightly with plastic zip ties behind her back, and arrested her. Asia Parks said that, as she walked from a protest in a different area, she also heard someone yell: “Get the girl in the green hat.” Three police officers grabbed her from behind and initially cuffed her wrists behind her back with zip ties; they later recuffed her wrists in front of her because of a metal pin in her arm. Megan Harrison and Asia Parks told Amnesty International they were neither advised of their rights nor told why they were arrested at that time. Asia Parks said an officer told her: “I don’t have to advise you of your rights because I’m not interrogating you.”

Police processed Megan Harrison and Asia Parks in a tented area by the CNN Center before officers put them on a bus. Even though they observed several empty buses parked nearby, police held them on a single bus with more than 50 other people from approximately 9.30pm until 12am, when they drove the protesters to the Atlanta City Detention Center. Asia Parks told Amnesty International, “A lot of people raised concerns about COVID because there were way too many people on the bus.” She asked the officers: “This isn’t safe for any of us, what is the plan?” She also pointed out the other empty nearby buses to them and asked: “Why are all of us on the bus?” They police did not answer. The windows and doors were kept closed when the police were not putting people on the bus. Police officers were wearing masks, but they were not handing them out to those detained on the bus. They took the temperatures of people when putting them on the bus, but took no other precautions around COVID-19.

Megan Harrison and Asia Parks were not released until early the next afternoon, after appearing in court for a bond hearing for curfew violations. From arrest to release, they had been detained for over 16 hours. Of the police violence in Atlanta, Megan added: “Being in Ferguson and the protests around Philando Castile’s death [in Minnesota in 2016], I’ve seen police do crazy things but nothing like this – absolutely unprovoked and on such a massive scale.”1 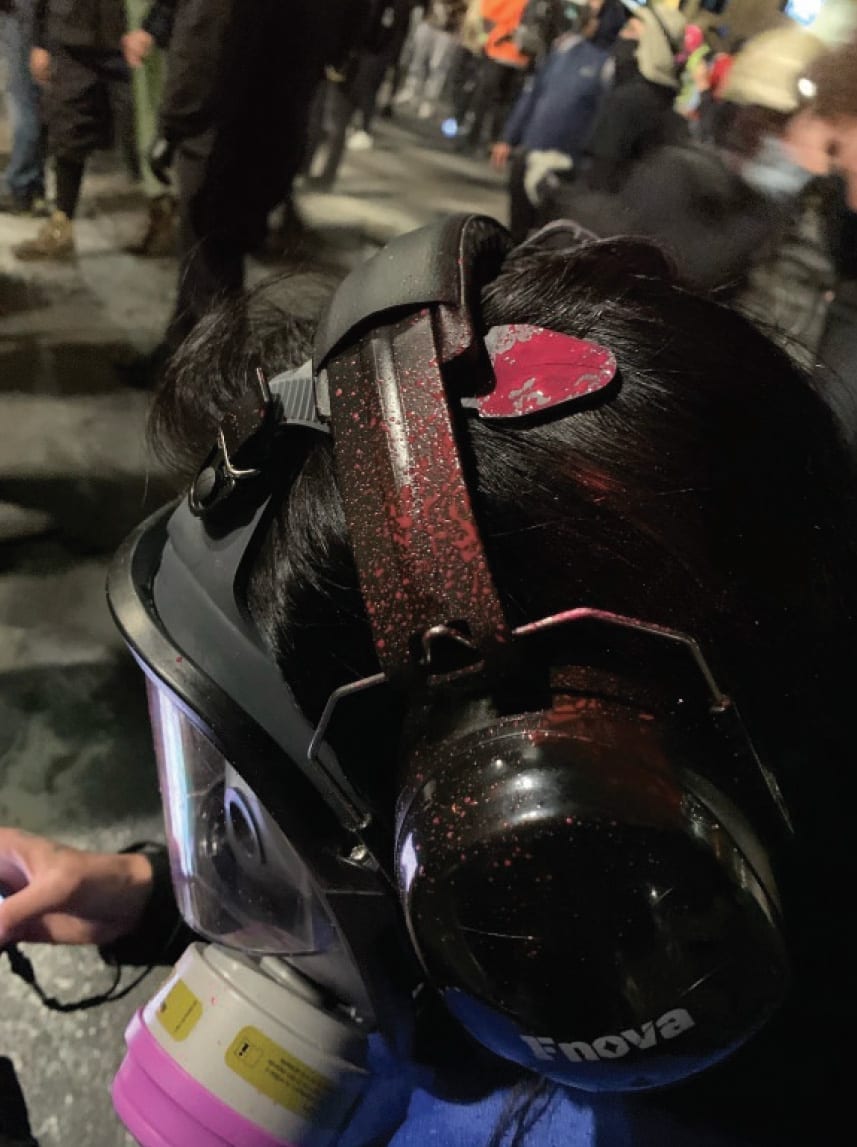 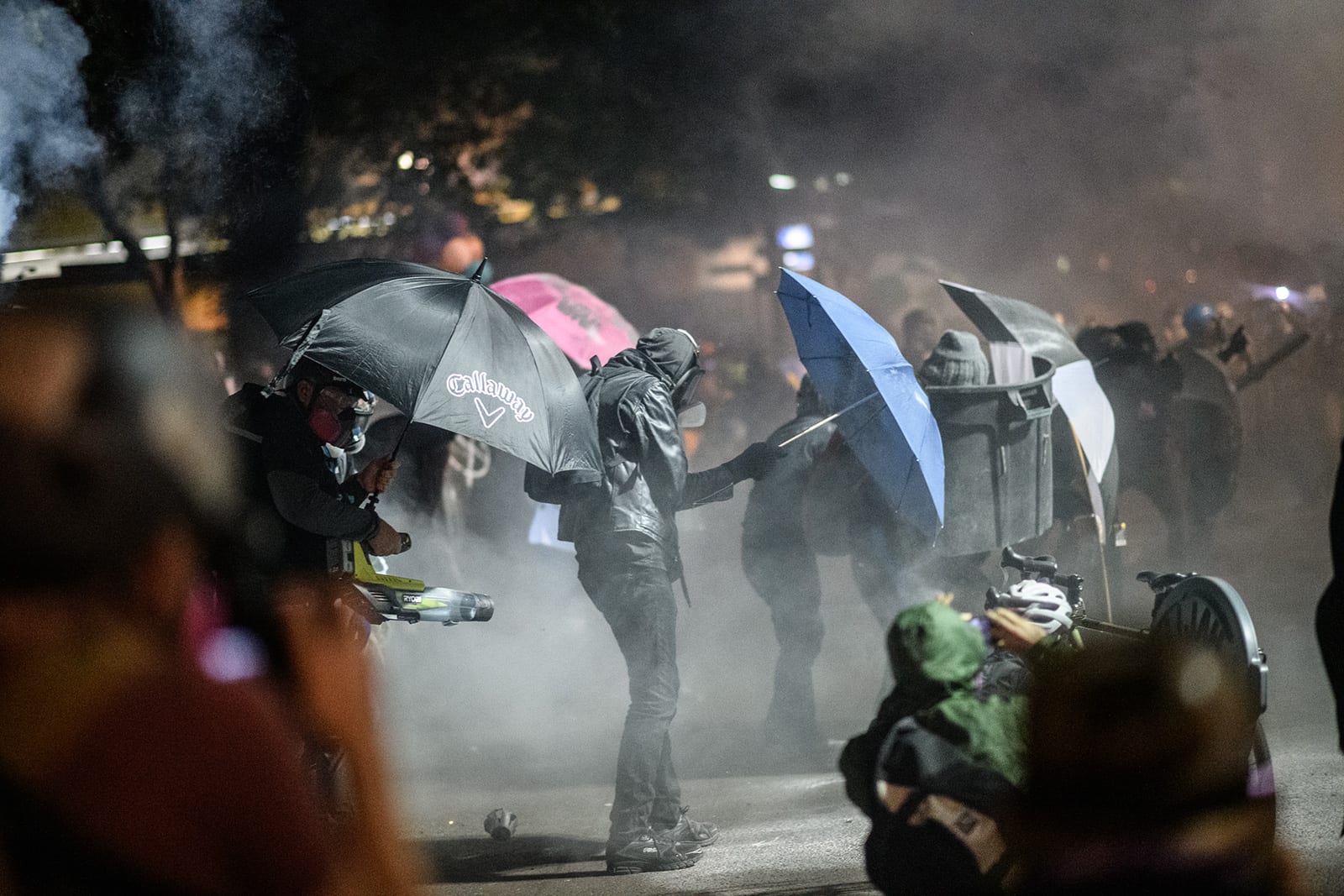 Kat Mahoney and Kim Mason, volunteer legal observers with the ACLU of Oregon since 2017, witnessed federal agents indiscriminately excessively deploying chemical irritants and indiscriminately firing impact projectiles daily against protesters, legal observers, and journalists since the agents deployed in Portland, Oregon, in July 2020. Kat Mahoney was targeted herself by federal agents despite being clearly identifiable as a legal observer in a bright blue ACLU vest.

We were able to go out and feel fairly safe until the federal agents came in. There’s not a way to keep ourselves safe now … I am torn between the importance of legal observers reporting on these events and providing information to the public and keeping legal observers safe. There’s no way to be down there safely now.

[Federal agents] do this as people are leaving – they shoot tear gas in front of and behind you and box you in. You hear all these explosions of tear gas canisters in rapid succession. They shoot flash bangs and pepper spray canisters, and you hear popping noises at the same time from pepper balls exploding. There is a whole array of chemicals and munitions coming at people. You are surrounded by powder and gas and no matter where you are, you are passing through it. A two block radius around the Federal Courthouse building becomes very toxic. All these chemicals mixing together in the air can’t be good for anyone.

Kim Mason added, “I can’t even count how many times people have been tear gassed. I’ve never seen so much tear gas; there are multicolored clouds of tear gas and a very, very strong chemical smell that hangs in the air. Federal agents have used tear gas every night since they’ve arrived.”

Kat Mahoney described another tactic where federal agents also shoot canisters of chemical irritants into the crowd of protesters from the upper floor of the Federal Courthouse. She told Amnesty International, “An agent will be looking over the edge of the building and will shine a flashlight down at the protestors or may use the strobe function. This creates a reaction from the protesters. Another agent will have binoculars as if looking for a target. A green light sometimes appears and lights up a protester. Seconds later, a chemical munition is fired down upon the protester.”

Kim Mason reported how the use of excessive force has led to bodily injury.

I’ve seen multiple people hit in the head by munitions. I was near the park and watched protesters carry this person to an ambulance, with massive amounts of blood dripping from his head. He didn’t seem conscious … We had a legal observer at the far edge of a park shot with a munition that looked like a pink paintball. This person was nowhere near the action. Another of our observers was subjected to a flash bang that was louder than usual. She was diagnosed with a slight concussion and she is concerned she may have suffered hearing damage.

She concluded, “I’ve never seen anything that’s less like ‘law and order’ than right now. It seems like chaos, and it’s cruel.”

Kat Mahoney reported she was targeted by federal agents despite being clearly identifiable wearing a bright blue ACLU legal observer vest and being grouped with other legal observers or media. Between 22 and 25 July, federal agents tear gassed and pepper sprayed her; hit with a kinetic impact projectile that looked like a pink paintball; and struck on her foot and knee with a kinetic impact projectiles shaped like tea light candles which emitted little fireworks upon impact.

Speaking of the federal response in Portland, Kat Mahoney concluded:

At its core, it’s bullying behavior. We fight wars, and I understand that to fight, people have to see the other side as not a human to be able to kill them. These are community members of Portland and they live here. There is no connection between the federal agents and the people in Portland. Nameless, faceless uniformed people are attacking these non-violent protesters in tee shirts and jeans. There’s no compassion. I see a lot of people with full-time jobs come down and volunteer. I see tents with free food, free supplies, and a clothing exchange. There are people who walk around with bulk supplies of earplugs to give out. It’s people helping people, creating community and connection. That’s a village you want to live in and these agents come in and try to destroy it. That’s not going to make the situation stop and it will cause escalation.