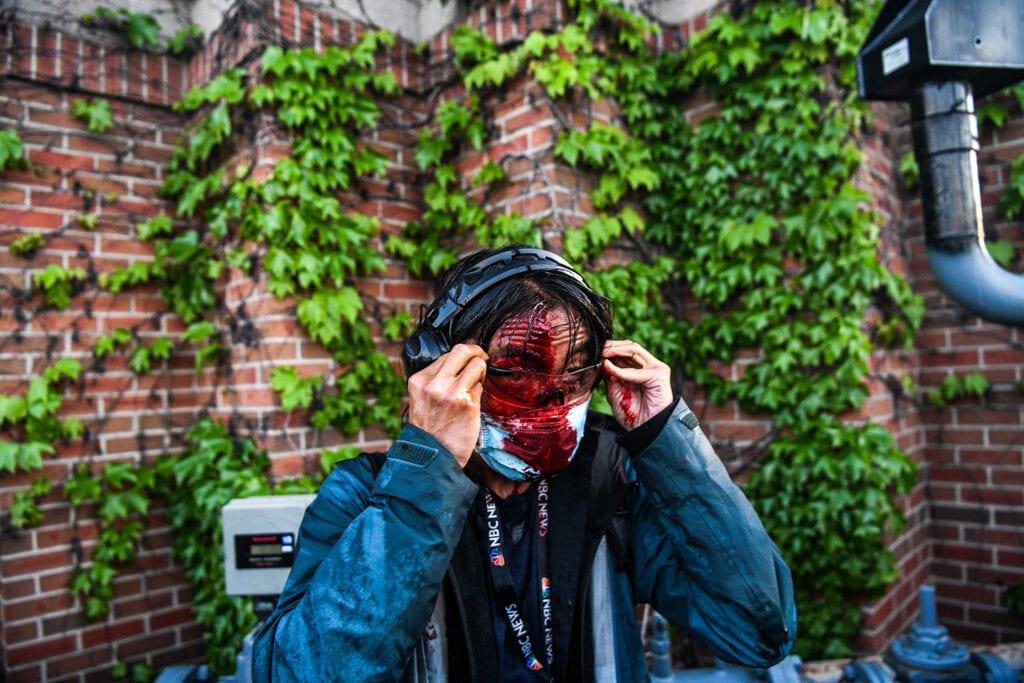 There was no mistaking that we were anything but a group of journalists trying to stay out of the way.

On 30 May 2020, Ed Ou, a photojournalist with NBC News, was in a group of about 20 press and photojournalists covering the Minneapolis demonstrations. As they stood apart from protesters, police fired tear gas, pepper spray and percussion grenades at them and used batons while corralling them. The group was clustered together wearing press badges and carrying professional photojournalist gear and other equipment. Ed Ou was wearing a press badge with NBC and its logo visibly marked. He told Amnesty International that police had a clear line of sight of the media.

Officers approached the group specifically and escalated the situation by firing percussion grenades. As they got closer, they sprayed pepper spray at Ed Ou’s face and camera. “They had enough time to shake the pepper spray and to spray it, despite me and others shouting, ‘Press, press,’ continually.” The group was corralled back into a dead end with nowhere to escape as the officers used batons to beat them and discharged grenades, tear gas, and pepper spray on them. Eventually Ed Ou was able to stumble away, unable to see clearly due to the tear gas and pepper spray. His head was bleeding. Several law enforcement officers walked past him offering no assistance. Ed Ou was treated at a nearby hospital, requiring four stitches for his head injury.

Ed Ou told Amnesty International1, “I’ve literally spent most of my career in places where being a journalist was something I had to hide and something I had to be careful about sharing. And this is one place where I should be able to proudly proclaim this is what I do. I am a journalist, and I am attacked for it. I was banned from Turkey, and now the Turkish government has spoken out about violations of press freedoms in the U.S. It is so ironic that the Turkish government, which has imprisoned more journalists than other government, can now claim moral high ground. This is so insane.”

On 30 May 2020 in Raleigh, North Carolina, police targeted Charlie McGee, a freelance journalist who subsequently joined the staff at Bloomberg News, with tear gas while he was covering protests downtown.

Throughout the day, Charlie McGee was covering the protests wearing a laminated lanyard that said “PRESS” in large text. Approximately 20 minutes before police shot tear gas at him, he was speaking with a bystander who was complaining to an officer about pepper spraying and police chasing a man. The police knew who Charlie McGee was; he had just been trying to take a photograph on his phone of the officer speaking to the bystander.

When police fired tear gas at him, he was standing in the street, next to a photojournalist who was carrying professional gear, in a completely non-violent section of the protest. There was no one within five to 10 feet of him except the photojournalist and a man who had been sitting on a bench for hours.

All of a sudden, a tear gas canister almost hit him by his right side and then another to his left. There was no curfew and there had been no order to disperse. Charlie McGee told Amnesty International: “It was a very surprising and shocking tear gas incident that didn’t seem to be directed to diffuse any property damage or protest action happening.” He added: “They knew I was a journalist.” He ran up the road to get away from the immediate impact and continued reporting, but at the end of the night, as he was driving home, he had to pull over to the side of the highway twice to vomit from the exposure.1 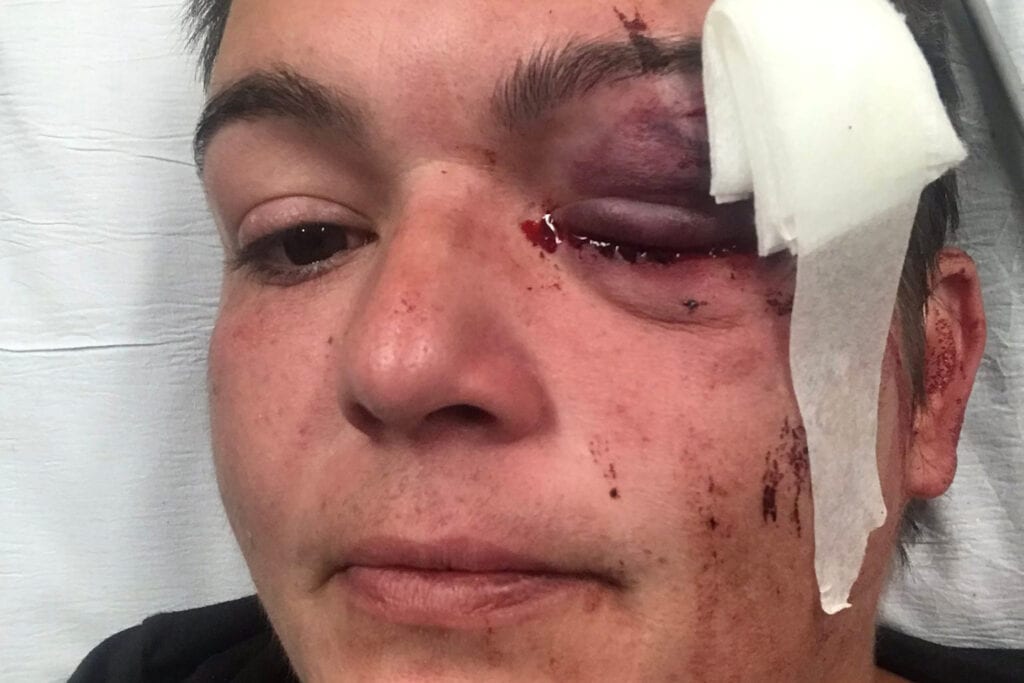 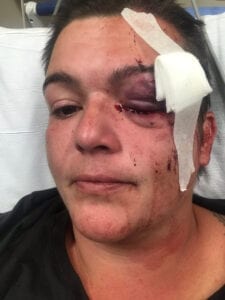 I had covered Ferguson – I thought it would be amongst the worst. I did not have a reasonable expectation of getting hit in the face at close range when not in a scrum. I had no expectation of being targeted for being in violation of curfew because media specifically had been exempted.

Linda Tirado, a freelance journalist and author, was blinded in one eye in the early hours of the morning on 30 May 2020 after police fired a kinetic impact projectile at her. The last photo she took from her camera was at 12.34am. She arrived at the hospital at 12.47am where she resumed taking pictures. During this 13-minute window, police shot her multiple times while she was photographing law enforcement aiming 40mm projectiles directly at her. The pressure of the projectile hitting her goggles made them pop off, and she was exposed to tear gas at the same time. As a result of the impact and tear gas, her eyebrow was lacerated and bleeding, and she could not see. She cried out, “I’m press, I’m press.” She blindly followed a stranger who put her into a private van.

Linda Tirado was in surgery within the hour. At the hospital, she discovered her backpack was covered with a tracker of green fluorescent paint. At the time of the incident, Linda Tirado was clearly identified as press, with standard professional photojournalist equipment and a laminated and reflective lanyard hanging from her neck against a black shirt to better draw attention to the press badge. She was in position between the advancing police line and the protesters, retreating as law enforcement advanced. There were no protesters standing near her and she was continuously taking photographs of law enforcement. While she previously had been caught in crowd control measures and hit with bear spray (heavy duty pepper spray) in Ferguson, Missouri, she told Amnesty, “I’ve never been targeted to my knowledge by a projectile weapon or kinetic weapon. They 100% knew we were journalists.”1

Andrea Sahouri told Amnesty International that after police in riot gear showed up and ordered the protesters to disperse, people began running in multiple directions. As the police fired tear gas, protesters ran into a busy commercial intersection. Andrea Sahouri and her colleague ran too. As they rounded the corner of a store, the police charged at them. Even as she kept yelling, “I’m press, I’m press, I’m press,” she was pepper sprayed on her arms and face twice at close range. “We dispersed, and they charged at us. It’s not tag.” The police arrested Andrea Sahouri, cuffed her in zip ties behind her back, and placed her in a van. Her face was covered in pepper spray, coating the face mask she was wearing; she said her entire face and eyes were burning and she was crying out in pain. While detained at the jail, she had to shower and change clothes due to the pepper spray. She was charged with failure to disperse and interference with official acts and released around 11.30pm that same night.1 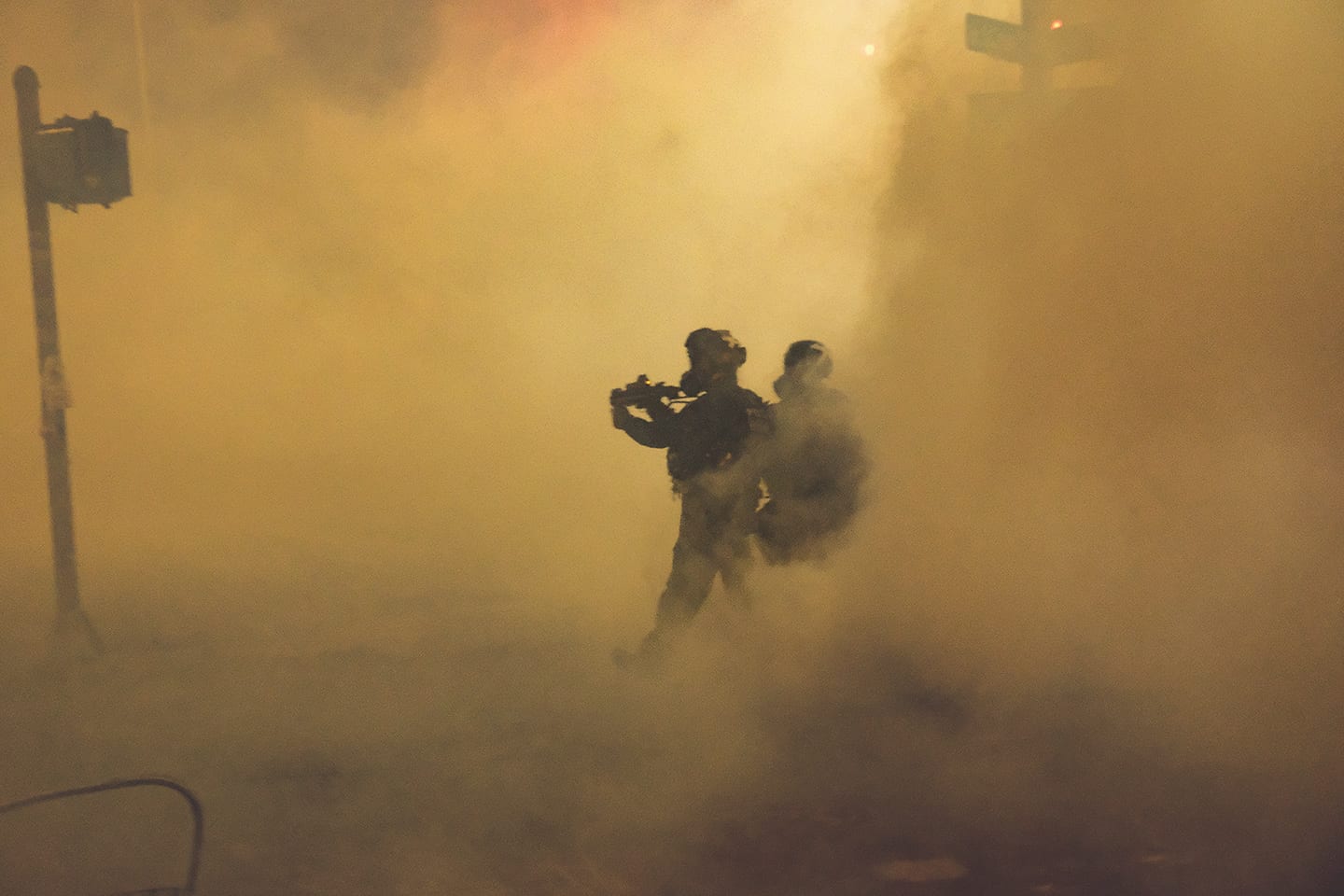 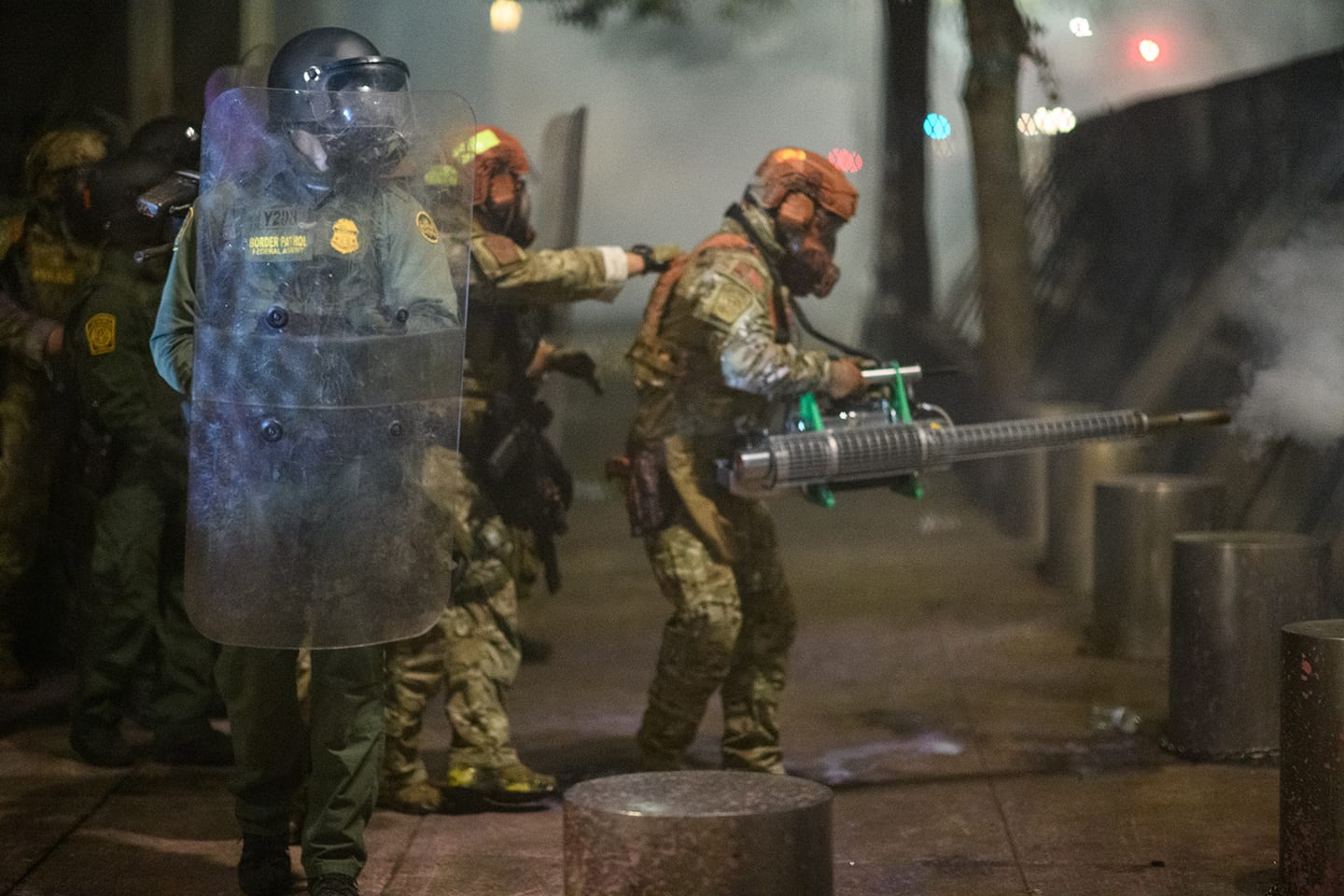 James Krane, a freelance photojournalist in Portland, Oregon, has been covering the city’s activism scenes for four years. He covered the protest-related deployment of federal agents in the city for over two weeks, beginning from 5 July 2020, and was targeted by federal agents and witnessed excessive use of chemicals irritants.

No one knew when and how they would be hurt, but everyone down there weighed injury against the right to remain there and protest safely.

While covering the protests, James Krane kept his press badge visible at all times, was wearing a helmet with “Press” labeled across it, and was carrying professional gear. He was also grouped with other similarly identifiable members of the media. Federal agents singled out and targeted these journalists in their attacks:

I frequently saw them pointing at me and other journalists, pointing us out. There was some very obvious visual targeting of journalists. As chaos would unravel, they would fire into a group of press. A lot of us would have to huddle together. There several times they aimed into a press huddle that I was in and started firing off rounds. I was not hit with any large rounds, but I was frequently hit with tear gas and rubber and pepper balls. I’d say every night I was hit with rapid fire pepper rounds. They would shoot them like it was an Uzi, there’d be a ratatatatat.

Like other people Amnesty International interviewed in Portland, James Krane described the excessive use of tear gas by federal agents:

What I observed a lot of first and foremost was they would use tear gas. That was the very first tactic, time and time and time again. Sometimes it was pulling a pin out of a canister and rolling it down the street at people, multiple times including at myself. I saw canisters fired into crowds and I saw them fired onto the sides of buildings and bounce off into crowds. The tear gas made it so no one could see. Once the visibility was at zero, they would fire impact munitions into crowds. They used pepper balls and what looked like rubber-coated paint balls. It appeared to me the majority of those rounds would be fired into the center of the park, away from where the fence rattling was happening by the courthouse which was their concern.

He added, “The tear gas was delivered in metal canisters, and when the canisters exploded, there would be metal shrapnel everywhere. It would cut people, get into their hair and clothing. The things they were firing into the crowd, even if they didn’t hit you, they would cut you pretty good.”

James Krane described federal agents using a new device to deploy tear gas starting the night of July 29 and early in the morning of July 30:

They look like flame throwers. I heard them called white fogger machines. They would just blow massive plumes of tear gas. It was something else. You couldn’t see your hand three inches from your face for 2-3 city blocks. It would seem they combined tear gas and pepper spray. My respirator would work fine for the tear gas but I could feel the pepper spray. My skin was burning and I would need to move out of the area because the irritant on my skin would be so bad. It felt you had been pepper sprayed all over your body. It was one of most unusual in-person military devices I’ve even seen. And it was the most menacing device I’ve seen used by officers at a protest.